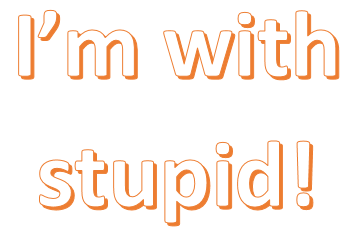 I recently wrote about Fake Leadership and the four characteristics you can use to recognise it. Now, in the wake of the UK General Election, I’m hearing the term “stupid leadership” and, perhaps surprisingly, there’s actually some academic research on the subject.

Mats Alvesson and Andre Spicer published “A stupidity-based theory of organisations” in 2012. They describe “functional stupidity” as an under-recognised feature of organisational life. This exists in organisations that emphasise image and symbolic manipulation (spin). These are organisations where presentation is more important than substance.

Inevitably, this stupidity starts at the top and results in a leadership style that marginalises challenges and only wants to hear messages that reinforce their own views. While this might give a sense of stability and certainty for others in the organisation, it stifles dialogue and risks leading the organisation into disaster.

Examples of functional stupidity include:

– Senior managers who are more interested in impressive PowerPoint presentations than in analysis of data and evidence
– Marketing people who are more interested in branding (and re-branding) rather than understanding what their customers really value (which may often actually be quality or value/price)
– Communications teams who obsess about spinning positive messages despite the evidence that there are fundamental issues affecting customers and other stakeholders
– Organisations that initiate (yet more) change and transformation initiatives that make the same mistakes as previous, failed, attempts to improve performance

Functional stupidity can, apparently, lead to good short-term results because everyone keeps their head down and just gets on with the day job, not wishing to challenge the status quo for fear of the consequences. Alvesson and Spicer refer to this as the Stupidity Paradox.

However, stupidity in the workplace is likely to cause problems in the long-term. Problems that may well be obvious to the outside world may simply get overlooked, or worse, deliberately ignored, internally. The collective stupidity of the banking sector led to the financial crisis of 2008. Similarly, Nokia failed to recognise the threat of the iPhone and Kodak was convinced it was in the “film business” while their customers were actually interested in capturing and sharing memories (photos). There are plenty of examples in the public sector, too, where we see policies, legislation and advertising campaigns that simply add cost and make little impact on what citizens really want or need.

All this happens despite these organisations often having a wealth of intelligent people. There’s a particular risk if this “intelligence” is confined to a small group of trusted advisors, especially if these people have their own ideologies or personal agendas. The consequence is that the monkey and the organ-grinder are often not who many people actually think!

The pitfalls associated with stupidity can be avoided in several ways:
– make the desired outcomes of a decision or course of action really clear so that it is easier to hold people accountable and to give people more autonomy in finding solutions
– encourage more people to play the devil’s advocate and specifically ask challenging questions, without fear of ridicule or retribution
– make more use of data, evidence and professional expertise; the experts are out there, they’re just not being listened to because these stupid leaders think they know better

I was speaking with a senior manager recently about the decisions being made by another company and he described their Board of Directors as a “bunch of idiots”. It seemed a damning description and a pretty clear sign that stupidity and big egos were at play.

Finally, it’s worth quoting Albert Einstein: “Only two things are infinite, the universe and human stupidity and I’m not sure about the former.”