Can the public sector “do” Continuous Improvement? 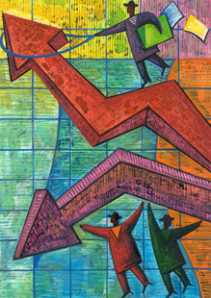 I’ve written previously about the public sector and its ability to improve itself.  In 2010, I asked “Can the public sector improve itself?” and concluded that it had to if it was to survive in the current economic climate.  Two years on and I’m not sure there’s much evidence of Continuous Improvement, but lots of evidence of “cuts” and ever more “salami slicing” of budgets.

I have also written a paper “Are you ready for Continuous Improvement?” which describes the three phases organisations typically go through on their CI journeys.

She described the origins and popularity of Systems Thinking, including the application of Lean.  She also proposed that CI depended on three things: Culture/Values, Processes and Structure. Her view was that insufficient attention has been paid to structure and she proposed Stafford Beer’s Viable Systems Model as a useful framework for organisations to think about structures (as opposed to the ’old’ hierarchy model).

I have to say I wasn’t convinced about the focus on structure.  I usually follow the sequence Strategy – Processes – Structure. Strategy defines Processes and Processes define Structure.  Organisations can only decide what structure is appropriate if they have a clear strategy and understand the key processes required to deliver it.

I was introduced to the Viable Systems Model in the 1990s and our practical experience of it was that it was a lovely academic model, but very hard for organisations to apply in practice.

Amanda covered a lot of material, but the one word missing for me was ’leadership’ and it didn’t seem to appear in her 3 requirements for successful CI.  In my view, all attempts to embed CI are doomed unless senior people get involved (and usually change their behaviour).  In my article on CI readiness I said: “A further significant lesson is that the leadership style and capability of senior and middle managers is a major determinant of success. Command and control might work while you are in phase 1, but a more empowering style is needed in phases 2 and 3. Recognise that some of your managers aren’t going to make the change; either they won’t want to, or won’t be able to. You need to anticipate this and have a plan to deal with them humanely.”

The ICiPS is a not for profit professional membership organisation, established to enable the public sector to become self-sufficient in the implementation of continuous improvement (CI), facilitating cross-cutting initiatives, encouraging skills development and supporting delivery.

An article about the launch of ICiPS on the Public Service Blog titled “Why has continuous improvement never been fully embedded in the public sector?” in 2012 says: “With an urgent need across the public sector to deliver efficiencies, the benefits of CI are clear, but success depends upon strong leadership and engagement of staff at all levels.”

A few years ago a group of UK managers was being shown round various Japanese companies to see how they had made such impressive steps in quality improvement.  One of the UK managers asked why the Japanese were being so open and sharing their “secrets”.  The response was “It will take you ten years to get where we are now and by then we’ll be further ahead.  And, we know you won’t do it”.  The Japanese believed it just wasn’t in the culture of western organisations to implement and sustain continuous performance improvement.  I suspect the same could be said about the public sector and its inability to “do” CI.

A final thought: Continuous Improvement is a journey, not a destination.